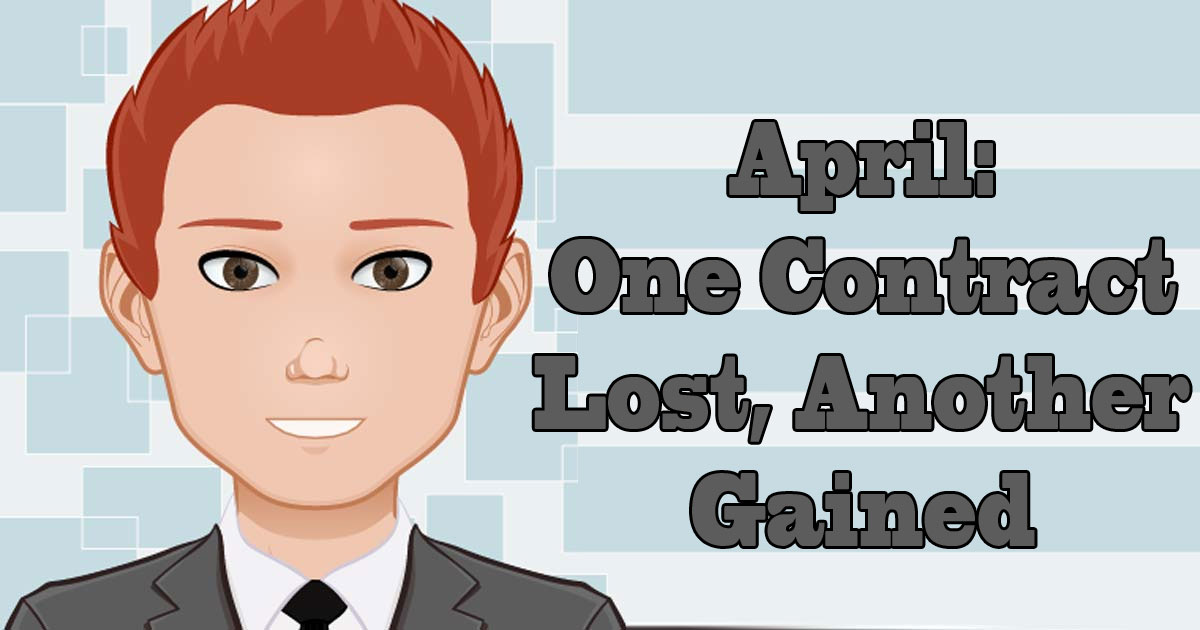 I had high hopes for April, but right from the start, it was nothing but a nightmare. Seemed like everything started to fall apart when I thought things would finally start coming together. Everything from investments to businesses to client work had problems.

To top it off, my schedule got all screwed up, and then I overslept nearly missing a client call. That ruined my schedule for the rest of the week before I was able to get back on track. Plus, the whole shelter-in-place order was extended, which is annoying, but I think it’s taking its toll on everyone else I deal with, as well. No one is happy and dealing with unhappy people all day is not fun.

The original plan was to continue to save money, but that terrible plan was created before the virus outbreak. After moving funds into brokerage accounts at the end of last month, I was mainly focused on selling websites. However, that has turned to getting some SBA loans or at least some deferments on my existing loans.

Right now, I am still in a decent position, but I don’t know how much longer this whole lockdown thing will last, and while money is available, I feel like I should try to get some.

However, every time I go to do anything, I get stopped with the excuse that things aren’t ready or no one knows how to proceed. This lasted for a while and even when applications could be submitted, more problems were faced along with technical difficulties.

I finally got everything submitted, but I have no idea when I will ever hear anything back, let alone actually see any money.

For client work, I did get notified that I would hit 2 weeks of 0 hours, but they would not be consecutive weeks as a way to help reduce cost, essentially I am being furloughed. Luckily, this is spread over 2 and a half months, so losing 2 weeks of work shouldn’t really be noticeable.

I also lost the most recent client the Friday before Easter. It was a bit of a surprise, but I also had little work to do, and this is the project that kept stalling out due to lack of work when trying to get hired.

Really, with all the investment deals falling through, I am actually a little happy to be done with it. There was a time when I thought it was the perfect position, but it turned out to be a disappointment and they wanted me to relocate to work from their office later in the year, which I wasn’t going to do. I may have lost the project in a few months because of that anyway.

With the while COVID-19 issue still going strong, I am not sure how likely I will be able to replace the client, but I am leaning more towards not even looking at the moment to focus on other things. There is one potential client that I may follow up with, however. Actually, there are a couple from the previous round of talks that I may follow up with. One is definitely closer to the finish line than the others, though.

I was able to reach out to one and within a week, get an offer done. However, I won’t actually start until May. They talked about a May 1st starting date, but since that’s a Friday, I will likely actually start on the 4th, I actually started on a Friday. I wanted to start sooner and got excited when they asked how quickly I could start, but they still gave me 2 weeks, as if I needed to submit notice to a former employer or something.

I got to spend the last week of April doing all the on-boarding documents and getting set up, including doing a lame background check. However, I did not have to do a drug test, which is not common. That’s usually required for every project I join. With no drug test and no equipment to send me, it seems weird they would still wait 2 weeks for me to start.

The last couple of weeks of the month, I have been feeling terrible, though. I am actually a bit happy I didn’t have to start the new client project. I was incredibly sleepy, and I had a toothache, which really only became unbearable at night. I should probably go see someone about the toothache, but with the whole shelter-in-place order in effect, I don’t really want to go out and find a dentist. I don’t see any other way, though, to get rid of the pain.

Even though dentists are doing emergency work, I’m having a hard time finding one that will do emergency work on new patients. I could be screwed for the next couple of weeks. I eventually got a call back on the last Sunday of the month saying I could come in the following day, Monday. It was a pretty basic trip to the dentist. A couple of x-rays were taken and that was about it. He just kept saying I would need to come back during normal hours for a regular exam.

April finished rather boring. After the trip to the dentist, the rest of the week was just waiting to start the new project. On the 29th, I did start getting pre-project work that was needed to get my computer in a state where I would be able to get access.

That went just as well as getting a new laptop where everything didn’t work and no one knew who to ask to find out why. I spent a couple of days leading up to May 1st with the help desk trying to get access, and even then, I couldn’t do it before my first official day.