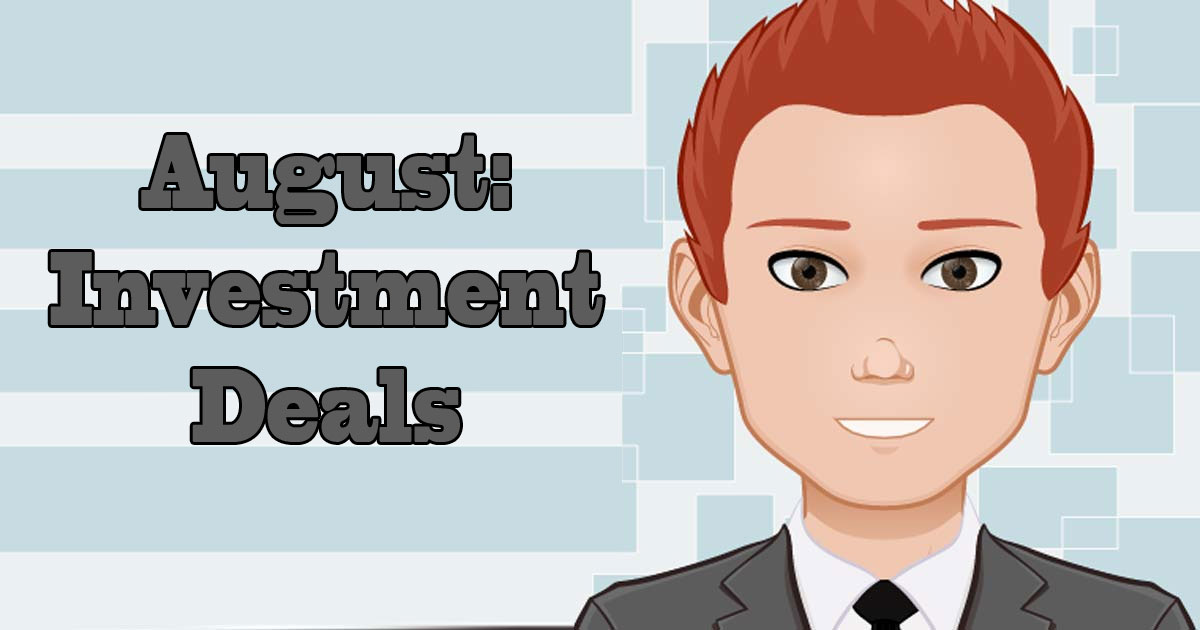 With August starting off on a Saturday, it was pretty uneventful. It was made even more boring by the fact that the investment deals are starting to take off, but go nowhere unless it’s normal business hours.

The first business day of the month had some investment deals moving, but client work was still fairly boring. The nice thing about August is it’s a big vacation month before school starts back up, so a lot of people are taking off.

With everyone working remote, vacation wasn’t really taken since there was nowhere to go and people weren’t coming into an office anyway.
It did take the first week of the month to get back on schedule after the terrible ending to last month. Even then, the first week wasn’t actually great. There were a few days where things were on track, but then a couple of days where I was completely off track again. It didn’t help that I wasn’t feeling too great that first week, either. Every day I woke up, I felt like I was getting sick, but it would wear off as the day went on just to come back the next morning.

That spilled over past the first week, which I was really hoping to avoid. Then it just kept going. By the middle of the month, I was staying up until 5:00am and then struggling to stay awake during the day when clients might message me.

August also became a month where I quickly realized nothing good would happen in it, but September showed promise for investment deals to finally be complete. Being tired, sick, and off schedule while knowing I had to just get through the month to see something positive makes the days drag on.

The only look I had to look forward to was my week of furlough. That’s not normally something I am excited about, but with the investment deals going which are already fully funded, I wasn’t stretched for cash. Being sick and behind schedule, the furlough was more of a benefit at this point. Plus, that client didn’t have a real clear path on the work I should be doing, so I was happy to just take a week off.

With the furlough, that did seem like a good time to start getting my own thing going again. I originally ran some ads which I have kept running, but I lost focus. I would like to start rebuilding that since cash for investments is basically covered and I would like to be able to reduce the amount of work I am personally doing, especially if I have to start traveling again. I still need time to ramp up selling my own sites and doing that now while I don’t need the money would be a good time to get this over with.

I need to reevaluate the ad strategy and more than likely, ramp it up a little more. Following up with existing customers is also an easy way to generate a little more business. The furlough client is also the slowest in terms of work, so being furloughed for the week didn’t really free up massive amounts of my time.

The investment deals are coming together, but still have some work to be done. The tentative closing date is towards the end of September, but by mid-September, all paperwork must be submitted. At least things are moving forward, but it’s still in the phase of filling out forms and then waiting.

Furlough week was largely spent with a mountain of paperwork for investments. Sadly, I didn’t get much else accomplished that week.
I got a bit sick the week of furlough. I get super sleepy to the point where I immediately fall asleep if I stopped moving. Staying awake for calls is brutal.

The diet plan seems to be the cause of the issue, so on Friday, the 21st, I gave up on it and switched directions. I may write a separate post about that. Not only was the changeup to help with being sick, but also to help get back on schedule.

After the furlough week, there was only one full week to go in August, and by that time, I was definitely ready for the month to be over with. Monday after that week did have a major shake-up. Even though the client I was on furlough with seems to have done nothing for that week, the newest client I had was down a team member.

When I started, I had the lead responsibilities which were then taken away. They were given to a developer who started the same day I did. I was fairly happy with that decision since it was less responsibility but the same pay.

My code goes to him for review, and I tried to get another ticket closed early on Monday before the status meeting just to say it was closed. When I tried to assign the review to him, his name wasn’t coming up.

I was a bit late to the status call, but there was another meeting that he set up afterward. He wasn’t in the call, and then I got the email saying everyone invited to his meeting needs to just decline it. I knew something was going on, so I texted him. He resigned and put in his 2-week notice, but they told him he didn’t need to work it out and that he was done immediately.

This could go either way for me. I definitely don’t want those responsibilities back, but whoever takes them over will end up being the person I spend most of my time with. If someone I don’t get along with ends up taking that position, I could be screwed.

I was ready for August to just be over with.