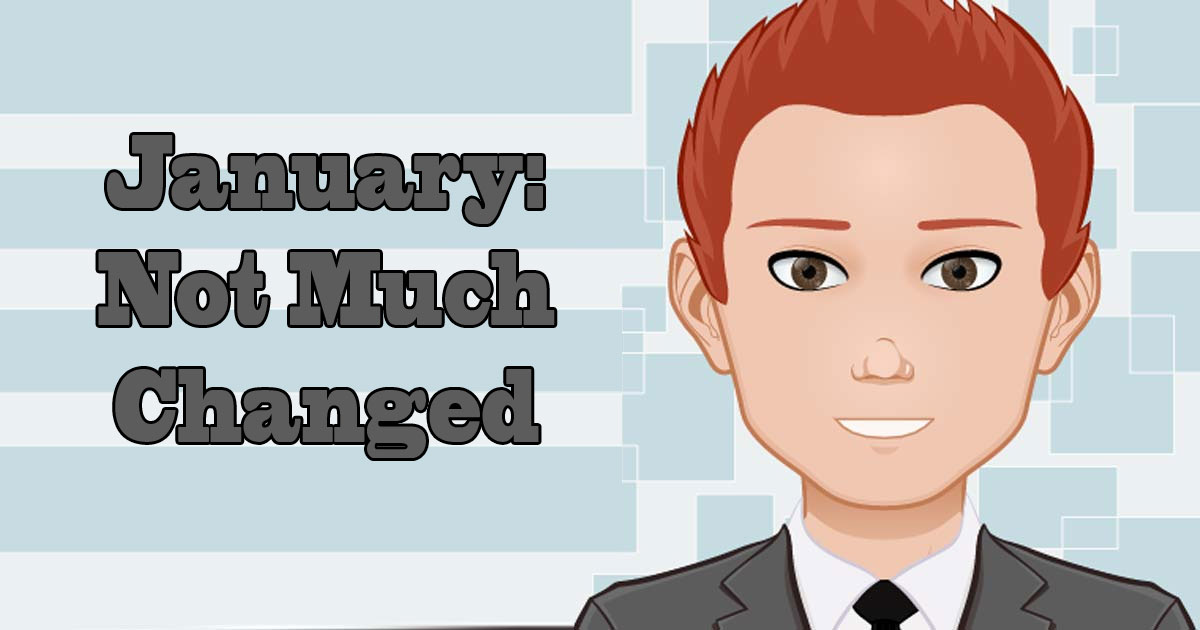 January was pretty uneventful. I didn’t transfer over money every week like I have been doing. Mainly to let my cash reserves build back up and to get some debt paid off. Nothing too concerning, but I had some rental properties that have property tax due. Plus, the credit card I put most of the travel expenses on still needs to be paid.

Also, I was a bit off schedule in January, especially in the first half. I don’t know if iI was still screwed up from traveling or getting sick, but I had a hard time waking up and just staying awake. After falling asleep in the evening, I would be up too late, and the whole cycle would repeat.

Client work started ramping up with the holidays over, and a lot of time was sucked into it. The nice thing is, it makes the days go by faster, but it can be a bit overwhelming at some points, especially when trying to get investment deals to go through.

The newest client still has some access issues, which has made my tasks a bit random. If something comes up that I can actually do, it goes to me.

Without getting a planned list ahead of time, it makes it hard to know exactly what I need to get done. Waiting around for tasks to come in makes it more likely I am working with another client when I get that task…which is annoying.

About mid-month, I submitted all paperwork requested for the first investment deal hoping that would finally close towards the end of the month. That closing, though, will require a trip to Ohio.

On the one hand, I want this done and complete, but on the other, I don’t really want to go to Ohio. After the New Jersey holiday party trip, I am happy to be home and back on a normal schedule.

The newest deal is still going, but I am intentionally slowing that one down to give the second deal, the real estate development deal, a chance to pick back up.

This deal, another commercial property, is last on my list, and I don’t want to get into the situation where I go all-in on this one, and then end up missing out on the other.

If one of them doesn’t get done, I would rather it be this one. However, I can never get the timing right, so I need to delay this deal, but not have it killed off completely just in case the real estate development deal gets paused again, or for some reason, gets killed itself.

With MLK Day in there, banks were delayed on getting me a response, which was inconvenient.

I started getting back on pace towards the end of the month, and originally had the first investment deal planned to close on the last Monday of the month. Then that started to move. We got further along with a Tuesday closing but weren’t real quick to nail down the time.

I headed to Ohio the Sunday before without get a definite confirmation for Tuesday. Without confirmation, I planned on going Sunday and staying through Thursday.

It was Monday afternoon by the time I got confirmation for Tuesday at 4:00pm, but then I hit a little snag. I transferred money to be able to do the wire, but I did it the wrong way, I transferred the money out of the account it needed to be in and to the high-yield savings account.

I then had to scramble to get the money required into the account. I didn’t ask for the wire information on Monday to buy myself a little more time. If the money wasn’t ready to go, the plan was the blame the lack of details ahead of time for the reason why the payment wasn’t sent.

The mobile deposits cleared in time, I was able to do the wire, and then show up to sign a ton of papers. No one else was there, and it was just me and the attorney. They made it sound like all of us had to get together and find a time that would work for everyone.

I was totally not expecting to be in a room with just one other guy scribbling my name over and over. At 3:00pm the following day, I got the call that the deed was recorded.  But at least this deal is finally done after almost 15 months of trying to do it.

My timing on making the drive back to North Carolina didn’t quite work out, though. I ended up going back the day I wanted to, but later. it helped since I wasn’t going to be in the car when clients may need me, but I didn’t get back home until about 1:00am. That screwed up my schedule like all the other traveling I did, which I was really trying to avoid. My schedule was off through the end of the month.

January is also the month I tried to get some new things in place. I still have to deal with things like taxes on the business and investments I have, so I am working on a new solution to make that more efficient.

I am also working on getting more sleep. It seems like I don’t sleep enough, and when I choose to sleep in on the weekends, I can easily sleep for 11 hours or so. The goal for the year is to sleep enough where I do not fall asleep during the day, but also not sleeping so much that I spend more time doing that than I do being awake.

This plan did not work so great the last few days of the month after returning from Ohio. Hopefully, I can get it back on track in the first week of next month.

I am also working on the new blogging strategy and trying to get some YouTube videos done, but that is far harder than I thought. I really haven’t created anything worth uploading, and I am considering doing several videos and then uploading all at once so I don’t end up with a channel with just a single video.

Everything I have seen about making videos says you basically learn as you go. I think it’s one of those things where I just have to come out with lame videos knowing they will be lame, and then aim to improve as I go.