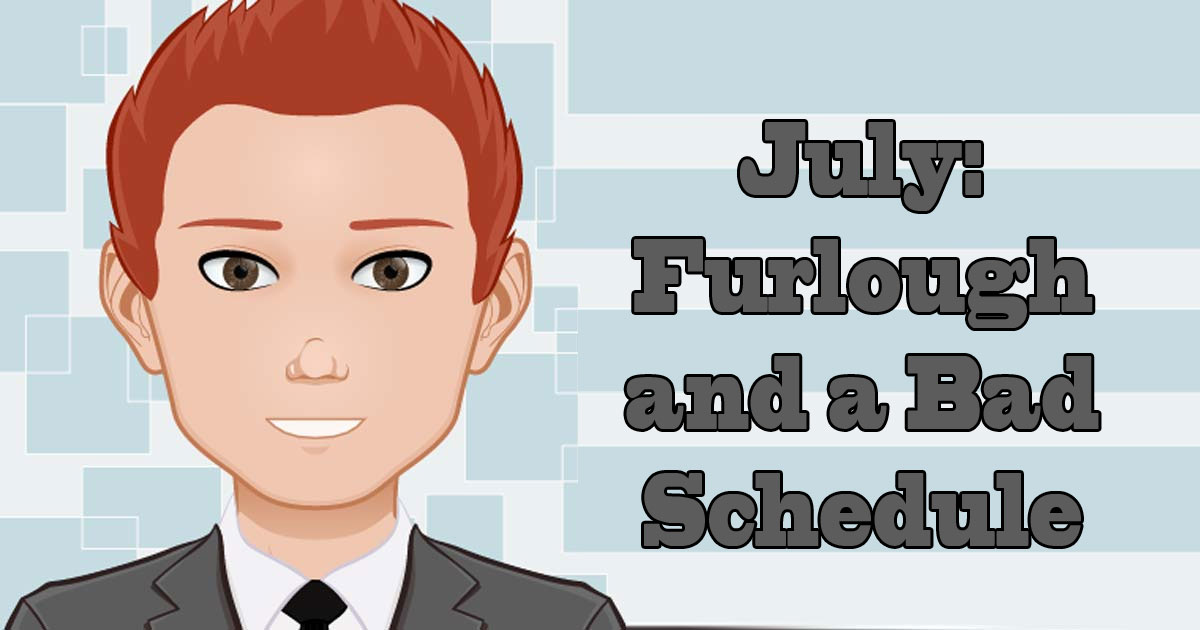 July at least started off better than previous months. However, with the first weekend being a holiday weekend, my schedule was screwed up. I don’t really know what happened, but on Friday, the 3rd, I slept almost the entire day.

At least I got back on track on Saturday, the 4th. Having it be a holiday actually helped with that, even though everything else I wanted to do was closed, including banks working on the investment deals.

The first full week of July wasn’t something I looked forward to. It was back to all client work with the furlough week being over, but another team member was then on furlough, so not only did I have to handle all the clients, but I had extra work to make up for the person who was out.

The other client also had a team member that was out, albeit on vacation and not furlough, so the workload was higher than normal all the way around.

I was excited to get the first full week over with, though. The next week, I was scheduled to be back on furlough from the same client, but I had some potential new clients talking to me, so even though I wasn’t getting paid from that client while furloughed, I felt like I was still making progress.

However, on Wednesday the week before the last furlough week, I was told that the furlough had to be pushed to August. I was excited to not have to work that week, but I do have a trip scheduled to Ohio for some investment deals that pushing the furlough week actually works out well.

Selling the weight lifting equipment might have been a bad idea, though. I have been spending way too much time messaging people trying to find used equipment to replace what I sold, and then cutting into client working time to make runs to pick stuff up. I also have to worry about selling extra equipment I bought.

Also, a friend came down from Ohio passing through North Carolina on the way to South Carolina. I met her for breakfast, but that really threw off my schedule as it was 45 minutes away. The second half of July started off no better than the beginning.

I ended up staying up later than I wanted, but still able to get up on time. I just tend to get sleepy around 6:00pm, which is usually after I am done with client work anyway, so it wasn’t too bad, but a quick nap that late all but guaranteed I was going to be staying up late again.

About half way through the month and I was already ready for it to b over. It got to the point every all the clients were complaining, even if things were out of my control, and everything was just getting annoying. Then I got sick, which didn’t help the situation. I actually took a sick day from one client, and after resting most of the weekend, my schedule became backward, where I was sleeping most of the day and staying up at night.

This lead to the week of another team member being on furlough, so it’s wasn’t the best time to have my schedule screwed up. I managed to stay awake for 24 hours to get my schedule close to being back on track. Keeping up with the whole fasting thing, though, made the days interesting when combined with staying up for so long.

I also got my first week of being on production support oncall, meaning I had to be available nights and weekends. Being put in this position and getting additional responsibility strengthens my contract making it less likely I lose it soon, but it’s work I don’t really like doing.

The one weekend I had to support did have a database patching and maintenance session planned which took significantly longer than I thought. I had to be available to shut down our application servers, and then wait several hours for the patching before bringing the servers back up.

I may actually be getting a new client. I have been in talks about a project that needed some help, but it always lead back to consulting company I wasn’t too excited to work with. I ended up getting a call from someone staffing that project, but the consulting company wasn’t in the picture. This would be staffed directly with the client.

I did the first round interview, but it was supposed to be a panel interview with 4 people. After finally getting it scheduled, 3 of the 4 got a high-priority meeting at the same time and had to cancel. It was really confusing whether or not I was going to do the interview with the 1 person remaining or if it was going to be rescheduled for all 4 or just the remaining 3. I ended up doing the interview at the original time with just 1 person.

After doing the call on a Friday, the recruiter kept calling me Monday morning. Not really feeling like doing another interview, but with 3 people this time, I dodged the calls. I ended up getting a text message saying they were trying to get a hold of me, but couldn’t and just wanted to let me know I got the position. However, that’s basically the last I heard of it. I followed up a few days later, and it seemed to have gone nowhere.

I don’t really know if I got the position or not, but I wasn’t super interested in it. Plus, the fact that a 4-person panel should have been there and instead it was only 1 person who was with the company for 3 weeks, it seems like a desperation move to hire me. In that case, I can only assume the team is fairly weak and assembled quickly instead of taking time to get high-quality developers on board. That’s another reason why I am not particularly fond of this position.

Towards the end of the month, I was happy for it to be over and August to start. It was the same type of situation I find myself in every month, nothing else positive will come this month so we might as well start the next one.