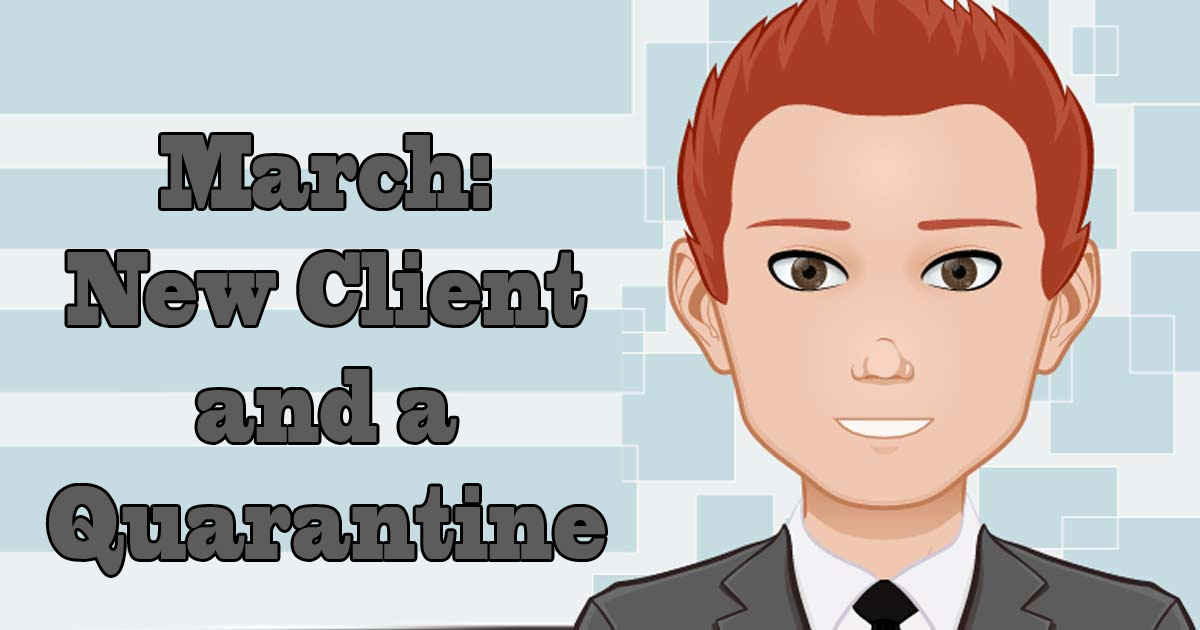 March started off well. On the 2nd, I got a call back from someone I originally talked to back in the days of trying to find new clients. They were finally ready to pull the trigger and wanted to know how soon I could start.

I told them I was coming off a contract on Friday, and they asked if I could start the following Monday, making no downtime between contracts. That was really the only thing that went well, though.

The Coronavirus really took a beating on the stock and commodities market, which adversely affected my investments. That altered the plan a little. Instead of going full throttle on saving for the investment deals, I wanted to buy more stocks to help lower my average while everything was down.

The sleep schedule still posed a problem. With the lower calories and trying to get in shape, my energy level took a hit early and I just wanted to spend the weekends sleeping.

That really kills my productivity. The goal of losing body fat might have to change, if I am too sleepy to ever do anything, especially on the weekends when I need to get caught up on all the tasks I didn’t get to throughout the week.

One task I was finally able to pull the trigger one was the marketing campaign to sell the sites. I decided it was better to run a terrible ad than to keep pushing it back. So, I finally started it.

I will write a more detailed post dedicated to it, but the theory was essentially starting was the hardest part. Once I got it going, I could tweak it, but waiting for it to be perfect before launching meant more years of just talking about it.

The ad actually ran into problems and was never approved. I had to open a support case to get it investigated. Once approved, it started to run but wasn’t as big as I thought it was going to be.

The good news is, there’s room to scale it up. The downfall, however, is it may be too limited to produce any valuable feedback.

That meant the campaign had to scale even if still untested in an attempt to get better feedback…just to make it scale. It definitely took more upfront cost and work than I originally thought. Scaling also required scheduling and waiting for approval, so it took more time than planned, as well.

The whole Coronavirus is causing all sorts of distractions. The stock market is going crazy with wild fluctuations. The plan was to not buy and save cash for the investment deals, but this got pretty hard. With stocks and commodities hitting multi-year lows, the temptation was to buy.

However, I resisted the urge and kept the cash for most of the month. But that was primarily to back up existing investments in case they started to tank. Businesses that are serviced-based, including the restaurant, started to feel the pressure of no large groups. The restaurant did have to cancel the St. Patrick’s Day celebration, which would have typically been a big moneymaker.

I did set up a transfer to Robinhood, just to have some money available if stocks kept crashing, but the amount of time it takes to transfer means it will really be available at the end of the month, or more likely next month. I also moved money into a brokerage account that I apparently haven’t transferred money into in a couple of years.

I couldn’t figure out how to do it, but it has same-day credits, unlike Robinhood. I ended up pulling the trigger on a few orders to buy stocks while they were down, mainly to lower my average.

Luckily, a high-yield savings account didn’t slash the interest rate along with the Fed. I did get approved for the Robinhood Cash Management account, but that got cut from 1.8% to 0.3% shortly after I got it. The savings account I have been using went from 1.7% to 1.5%…still way better than Robinhood.

I also found out towards the end of the month that most of the investment deals I was interested in were likely to die. It was probably a good thing I bought some stocks.

Client work was fairly steady. The nice thing about doing remote contract work is I wasn’t really affected by the whole virus and quarantine issues. Everyone else complained about not being able to go into the office, but that was standard for me.

We do have weird team video meetings where we all check in on each other. I will be happy once those are over.

Most clients are on a hiring freeze due to not being able to fly anyone in to meet with them in person. The good news is, it’s unlikely I would be let go during this time since a replacement would be too hard to get, but that also means not adding any new clients.

Towards the end of the month, I was really looking forward to the whole quarantined and shelter-in-place rules to be over. I doubt President Trump’s goal of Easter is doable, since the rule here in North Carolina is in effect until April 16th, but I hope it doesn’t extend past then.

Other than that, it was pretty much just a waiting game for April to start.