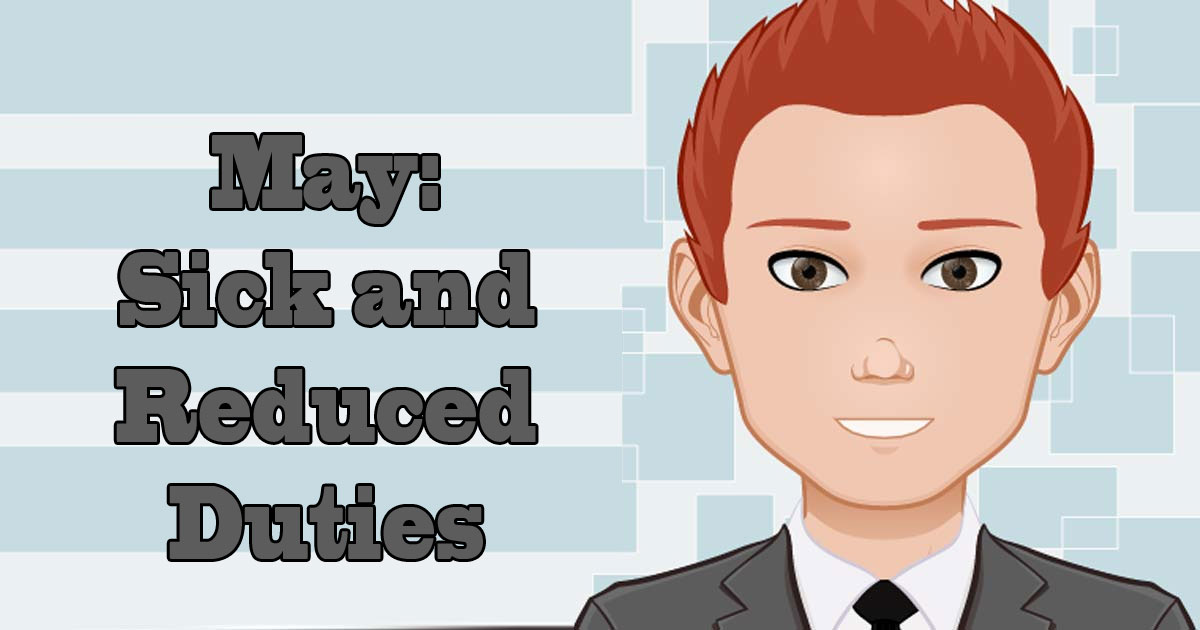 May started off with a day full of meetings…not only from the new client but all clients. That lasted way too long, and then my sleeping schedule got all screwed up on Saturday, which made the start to the month terrible. The first week being screwed up didn’t help that it was also my first full week with the new client.

The first full week of the new client also happened to be the week another team member on an existing client was on furlough. I thought that would be a slower week, but that caused everyone to panic, making it a harder week for me than expected. At least the meetings started to die down, though.

I did seem to get a bit sick at the beginning of the month, as well. Not sure if it was related to the sleeping issue, but I felt terrible. That kept me from being as productive as I wanted since it was a struggle to just keep up with the client work. Things started to get better in the second week of the month.

I did do some experimenting Mother’s day weekend to figure out why I got so sick, which may have backfired. I think I found the cause, but it just made me sick again. That weekend, I wasn’t nearly as productive as I should have been, which started me off behind schedule for another week.

It happened to be a week full of meetings with the newest client again. Luckily, other team members brought up the heavy meeting schedule and things started to shift around to make it easier for everyone, including me.
I also got to do my furlough week, which I was actually looking forward to.

The client is definitely the one I like the least, and I am starting to think it may be time to let them go. Before I fully commit to that, though, I would like to be established better with the new client. The furlough week is turning out to be more work since I have to get things done before I am off.

The new client did have me do more leading than I typically do, but those responsibilities were taken away from me during my second week. I didn’t really want them and I don’t mind losing them, as long as I stay a member of the development team. If I was hired primarily as a lead to just hand off work, and then I lose those responsibilities, I may end up losing the project as I no longer fit in.

Not really sure I care, though. I am thinking I need to stop focusing on client work since it takes so much of my time.

I have also been reevaluating my investment options and realize that almost everything has fallen through because of the virus. Even if something is still available, it’s way too risky for me right now. I am looking for new ones and will likely end up buying more investment properties just to rent out, even though paying down debt on the existing houses was a goal for this year.

Lending has definitely gotten stricter, however. With the goal of paying down debt, getting more loans seems to be going in the opposite direction, but with interest rates down, money is cheap…I just can’t seem to get it as I could. I am spending more time calling banks and verifying funds are available before doing anything. So far, that hasn’t been easy.

I may end up just go back to the rental properties like I have been doing, but I am also considering a new investment. The problem with the new one is first getting in the door with no experience in the industry. Combined with the virus outbreak and tightened lending requirements, this may not be doable, at least at this time. Right now, it’s the slow process of just gathering information. With the addition of the Memorial Day holiday, things are even slower.

May wasn’t nearly good as I was hoping for, and I am happy to finally get it over with. The last week, I finally started to get everything back on track, so I am hoping fo a better June. Plus, everything should be getting over this whole virus thing, so I am hopeful things will be getting back to normal, as well.

Also, 30 days into the new project still has me on thin ice. Getting through the next month will make my position far more stable. It’s at least moving in the right direction, though. Things should only continue to get better from here….or something super terrible will happen.