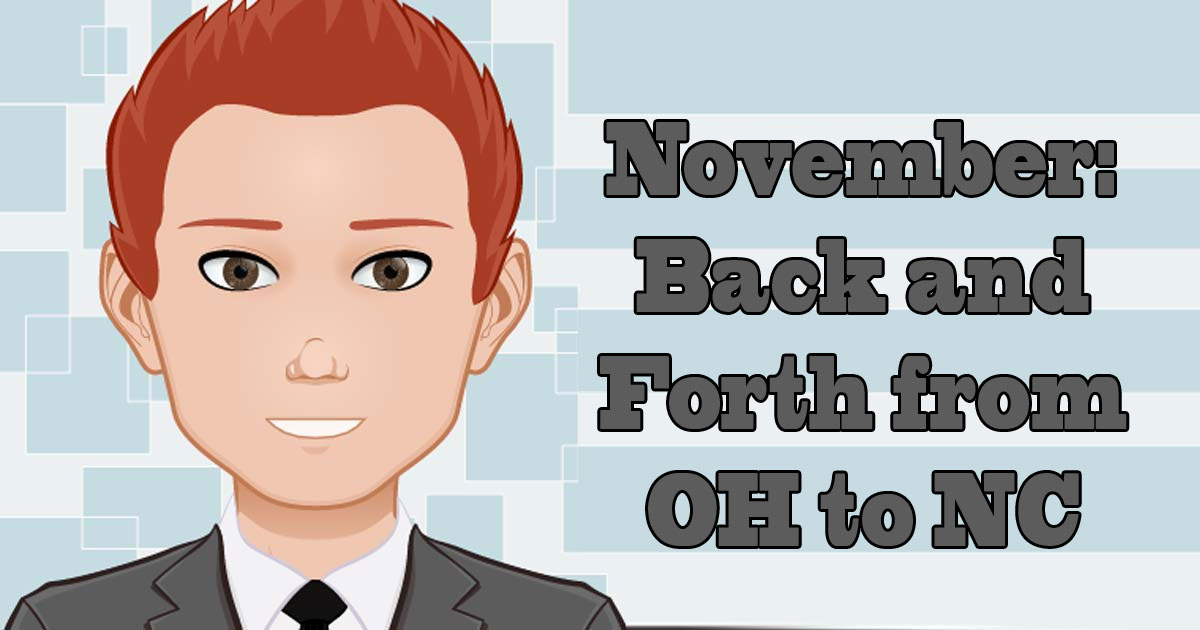 November started off on a Sunday, so it was slow. However, Monday started off with good news that was basically the hold-up to closing on the investment deal. However, Tuesday, everything was pretty much shut down for the election. That really didn’t help anything.

The house still seems a ways away from closing so I am considering a run back to NC. That would give me time to start packing, get the mail, and sell off things I don’t want to move. I also received notice that another client contract would end at the end of the year. Normally, I would be fine with it, but coming off last month with a contract ending, this means on January 1st, I will only have one client.

I am a bit relieved, however. The client that I am doing work for is the most demanding and the lowest paying. It’s also the work I like the least. I am happy to move on. I would have preferred to keep the client that I lost last month and part ways with this one instead.

The real concern now, though, is the client I am left with is the only one that had me go on furlough, so they aren’t the most financially sound. They are also in transition to another e-commerce platform and have outsourced all of that to another company. I was not a part of that, and it’s a platform I don’t know all that well.

That makes it very easy for them to decide to part ways with me in the near future, if the other company is handling all of the work. I do, however, have about 2 months to try to find a replacement for at least 1 of the 2 I lost recently. I would like to find a replacement, however, I am in the middle of moving with the new house getting closer to closing.

Ideally, I would move without the burden of a new client and then find a new one once I am settled in. A big reason for moving was my web development company is registered in Ohio, but I get saddled with NC tax because that’s where I am. If I could find clients while in Ohio, I get some tax breaks.

I made the run back to NC on the 7th, to start packing up and getting ready to move. On the 8th, I slept most of the day which was a big reason why I travel on Saturdays. However, I kind of regret not just having my contract end immediately instead of working out the last two months.

Now I have to deal with packing and moving, while still having the client to keep happy. Not too happy, though, since it’s definite that my contract is ending and I don’t really enjoy it enough to consider coming back. It’s still annoying to have to put up with the client demands knowing I am coming to an end especially when I have other stuff I could be doing.

Just trying to get out of NC is already proving to be difficult. I will be breaking my lease a bit early, but there was a provision for that in the lease. However, the leasing office is now claiming I cannot pay the full amount and still leave early. I must be present to personally hand the keys back in and it must be on the last day, December 31st. Paying, turning in the keys, and leaving early is not allowed…not sure how they will force me to stay in NC, but it’s been quite interesting so far.

I really just want to get the move over with. There’s not much left to do in NC or people to see, so I just want to get the packing, moving, and 8-hour drive done and over with. After one week of being here, I made no real progress on packing and moving. Mainly just dealt with the logistics of it all from turning in keys to getting everything cleaned.
At the beginning of the second week, I started listing stuff I didn’t want to move for sale. I also started putting stuff in boxes. Looking at everything, it didn’t seem like too much work to move the stuff in my 1-bedroom apartment.

I definitely haven’t been doing a great job of getting everything ready, but I finally got the green light on the investment deal I originally went to Ohio for. They wanted to do it the last Friday I was in North Carolina, but once they found out I was going back to Ohio, they pushed it to Monday so I could just do it in person.

That backfired when the new house appraisal came in $30,000 lower than the selling price. With that delay, the plan to Ohio was no longer needed, but I still had to go in order to close the other deal in person. The nice thing about the whole timing is it’s the week of Thanksgiving, so my brother also coming up. Being in Ohio to close means I can also do family stuff with him to provide a little more justification for going.

Leading up to the return trip to Ohio, I still didn’t hear anything about the house. I did resubmit an offer that matched the appraised value. I did, at least, get a copy of the papers I will be signing for the investment deal the week before actually signing them. That makes it way more likely that closing will actually take place when I am in Ohio this time. However, by the time I headed to Ohio, the house was still up in the air.

The drive up was on a Saturday so it was pretty uneventful. Sunday wasn’t much different but my plan of driving on Saturday because I tend to sleep on Sunday worked out in my favor. That’s exactly what happened. Monday had the deal close, but with Covid, the documents couldn’t be driven to the county to record immediately.

The house was another issue. I eventually pulled my offer after we couldn’t agree on a price at or below the appraised value. The sellers were holding out for a price above the value. On Tuesday, they came back and agreed to the appraised value, the offer I submitted after the first offer was killed because of the appraisal. That restarted the whole house situation and made it so moving was going to become a priority.

By Thanksgiving, I really just wanted to go back to NC and start the moving process. I also had another investment house in the works, which likely will end up an all-cash deal just to avoid two mortgages going at once. I will actually be pretty happy once everything is over and I can stop worrying about having the money available to complete everything in a way that doesn’t generate more paperwork to cover the trail the cash took to get to where it needed to be.

The drive back to NC on Black Friday was pretty uneventful, but I realized when I got back that everything was still closed for the holiday and would then lead into the weekend. There wasn’t much movement on any other investment deals or the house.

As for the actual move, I am now basically just throwing everything in a box just to get it over with. The idea of cleaning things out, throwing away or selling things I don’t want, and just moving the essentials is not really an option given the short timeline I have. The low appraisal followed by the week in Ohio really cut into the time I had to get ready. I could have done more the two weeks I was here before heading to Ohio for Thanksgiving, but at that time, the low appraisal killed the deal and we could not agree on a way to proceed. Continuing to pack would have been pointless if a deal wasn’t reached.

The last day of the month had client work scaling up, but with the contract of the one coming to a end next month, I wasn’t too excited about doing more work. The banks started again on the deals that were in the works since most people were returning from taking extended time off for the holiday. Pretty happy the month is over, but I will also be happy once next month is over and most of this starts to die down.