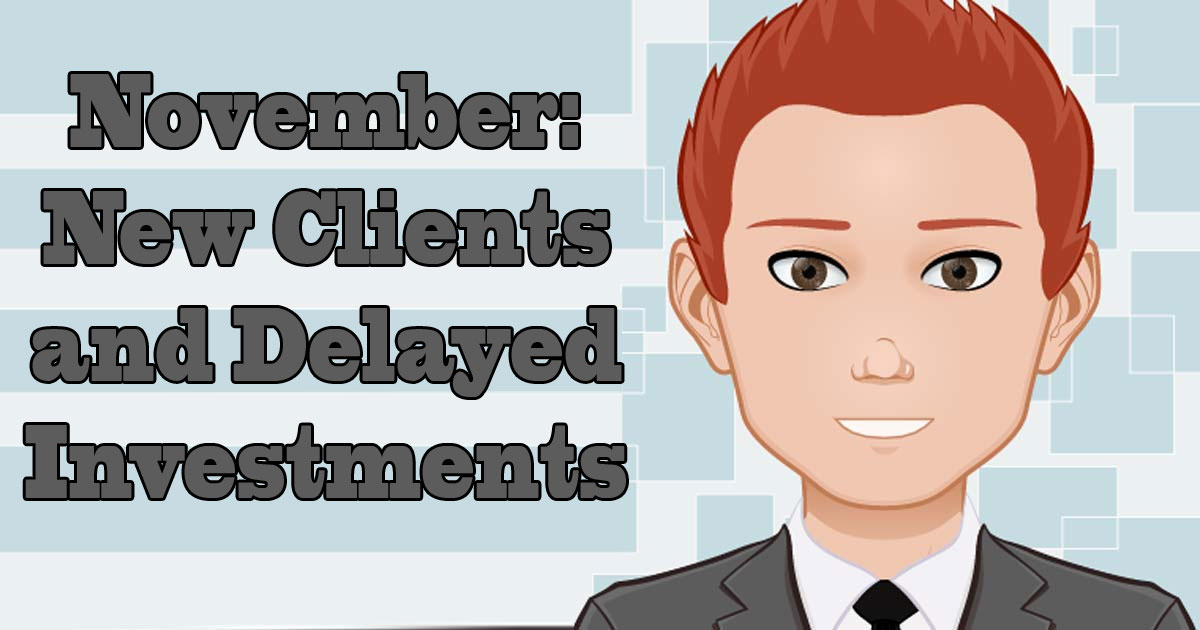 This month is also a prime month to capitalize on some type of holiday sales. I am starting off real behind. I do have the new client that will start paying, but I feel like I need to get something else going to close that gap.

I do have a few things going for me, though. The debt is essentially paid off, the new client will start paying, and by the end of the month, I should have had the new investment deal completed, but it was delayed. I am hoping it’s close, though

I had to travel every week this month. On the 5th, I went to Ohio for a client meeting on the 6th. That wasn’t bad as I went there the night before, spent the day, and then came back late that same day. I did land at 11:59pm, so it was after midnight when I finally got back to my apartment. My schedule was really screwed up from that. I have only a few days to get make on track before traveling again.

However, the next two weeks involved me going to New Jersey for the entire week. Travel time plus being on a client site makes doing the work for other clients way more inconvenient. But since it’s the start of the working relationship, I try to accommodate them as much as I can. It’s not two entire weeks, but Sunday through Friday…giving me Saturday back at my apartment.

That turned out to be inconvenient, though. Friday became a travel day, and then another one on Sunday. It would have probably been easier to just stay there through the weekend.

After those two weeks, I planned on going back to Ohio for the week of Thanksgiving to complete the investment deal. That was delayed, which was a little disappointing I wouldn’t be able to start collecting the money from it in December, but I was tired of traveling. I was happy to just stay in North Carolina.

However, client work and investments generate income. So even though I am getting tired of doing it and it’s a major inconvenience, it is what was needed to accomplish the goal I set out to do.

I did run into a problem while I was away. My user account for one client was somehow disabled, which blocked me from doing anything. I have been notified that my contract was over by this sort of thing, which makes me nervous now anytime it happens. It turned out my ID number changed with the contract switch, which caused all sorts of problems.

However, it also got me out of some things since I was locked out of the system. So it worked out well that it happened when I was traveling for another client.

Still trying to complete the investment as soon as possible, but a lot of things required are outside my control. After traveling for the client work, I don’t really care if the deal gets delayed just so I don’t have to travel again. My schedule is already messed up.

The investment that I thought was over, came back at the end of the month. The deal I thought would happen is delayed, but I don’t know for how long. Timing-wise, if it is delayed and this other deal popped up, it might work out well to do this one first and then go back to the delayed one.

Like these deals when I first heard about them, the details are taking forever to get. It will likely be early next month before I figure out if either or both are doable, and in what order would work best. Thanksgiving got in the way of working out the details, though.

I also run into the same issue with Christmas and New Year’s. That plus the week I am back on-site in December, next month is looking fairly limited on when I will have time to actually handle either investment.

Realistically, I may have to wait until January before I can finally pull the trigger on either of them. By then, I would really like to do both.