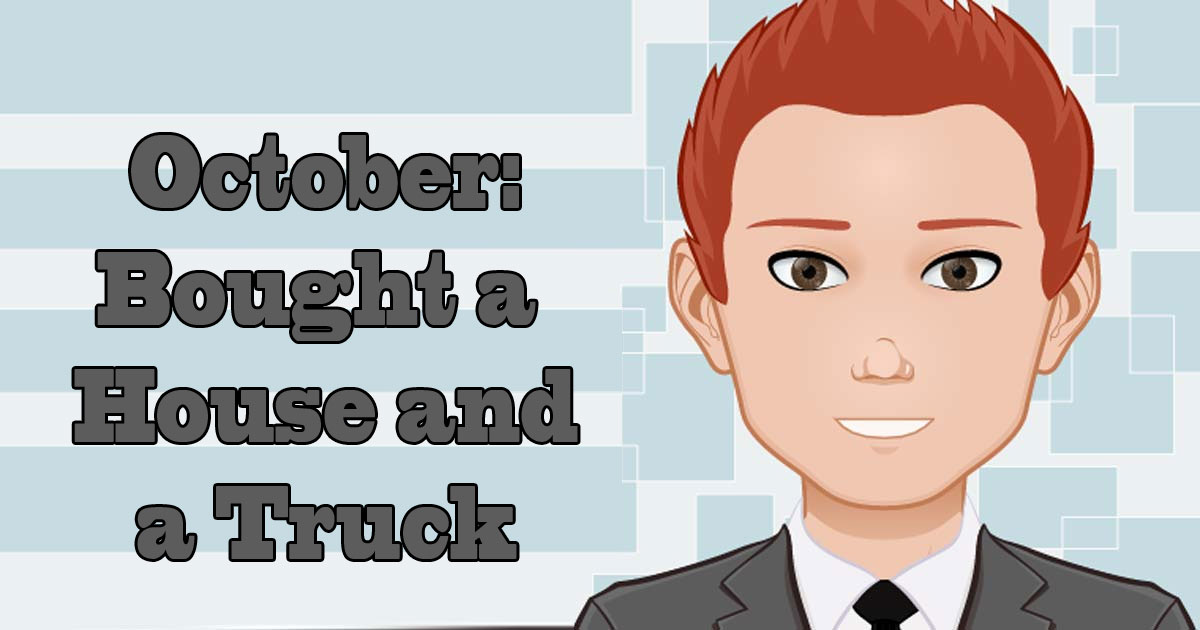 October started off with me still in Ohio. At the end of the two weeks in Ohio, the deal still wasn’t completed. So I spent the third week in Ohio, despite the original plan being just one. I ended up going to an auction for a house in Ohio that, if I would have gotten it, I would have lived in.

I am heavily considering moving back to Ohio to be closer to the investment and get things going more with those. The auction, however, was terrible. The house was a complete disappointment and needed significant work. The problem with an auction is when I finally see the condition and know work is needed, I don’t have a lot of time to figure out the cost of the work. So when the bidding starts, I have to aim low in order to have enough reserves for the cost of the renovations.

That led to looking at houses with a realtor while waiting for the deals to close. The houses the realtor showed weren’t great, though. Combined with the investment deals getting delayed, the third week of the Ohio trip was really pointless and getting annoying that I couldn’t go back to NC.

To help speed things up, I started to change the deals to make them easier to complete, at least partially. This lead to the key part of the dealing closing at the end of the 3rd week of me being in Ohio, but wasn’t enough to actually let me go back to NC that weekend. I stayed another week. It worked out fairly well since after partially completing a deal, I ended up staying awake longer than planned to get everything completed, and the day I should have been traveling, I slept in.

With the plan of moving back to Ohio, the delay in investments does give me more time to look at houses while I am here. By the middle of the month, I was looking at a house that I would end up making an offer on, but I lost the new client I had, which was also the highest-paying one, in the process.

It comes at a bit of a bad time since I am trying to buy a house and do deals, but I was a little happy not to have to deal with that client while in Ohio. The house offer was accepted and being able to work on that along with the new deals without having the extra client makes it far less stressful.

With the offer accepted, that started a whole other process of submitting documents and filling out forms. Since it’s a new bank and not the one I have been doing the deals with, I have to submit everything all over again. The only slight benefit is a lot of personal documents I had to submit for the investment deals are the same I have to submit for the mortgage. At least I have them all handy and not looking for old tax returns and other documents.

The house deal itself is also taking quite the amount of time to complete. I spent most days after the offer was submitted just waiting. Occassionaly I would gather forms or take calls, but the overall process of buying a house is less-action packed than many believe.

After spending two days sending documents, the response I got on day three was “thank you!” I finally had the signed purchase agreement sent in, which sounded like it got things moving. Eventually, I got the call that locked in the rate along with the email that asked for a credit card to bill the appraisal to along with kickstarting the title work.

October quickly became a boring month that I was really ready for it to be over. Two of the clients I have, I started in November. Getting past that first year strengths the relationship, which is important now with the new client ending the contract. Going into the last week of the month, I was hopeful an investment deal would finally close and the new house would be closer to closing as well.

That Monday, nothing really happened. I did get a couple of emails to make it look like things were moved on the house and the investment deal, but nothing significant. Tuesday was more or less the same. Some emails and a phone call that said things were moving forward, but nothing concrete or detailed. Wednesday had me spending 8 hours in Cleveland buying a box truck. It would not only be helpful for moving to Ohio, but it’s also something the new businesses I bought could use as well. Thursday was basically nothing, just did client work. Friday was the same. Saturday was actually pretty boring.

Now that the month is over, I am hopeful that November will bring the deals to a close and things will finally start getting good.