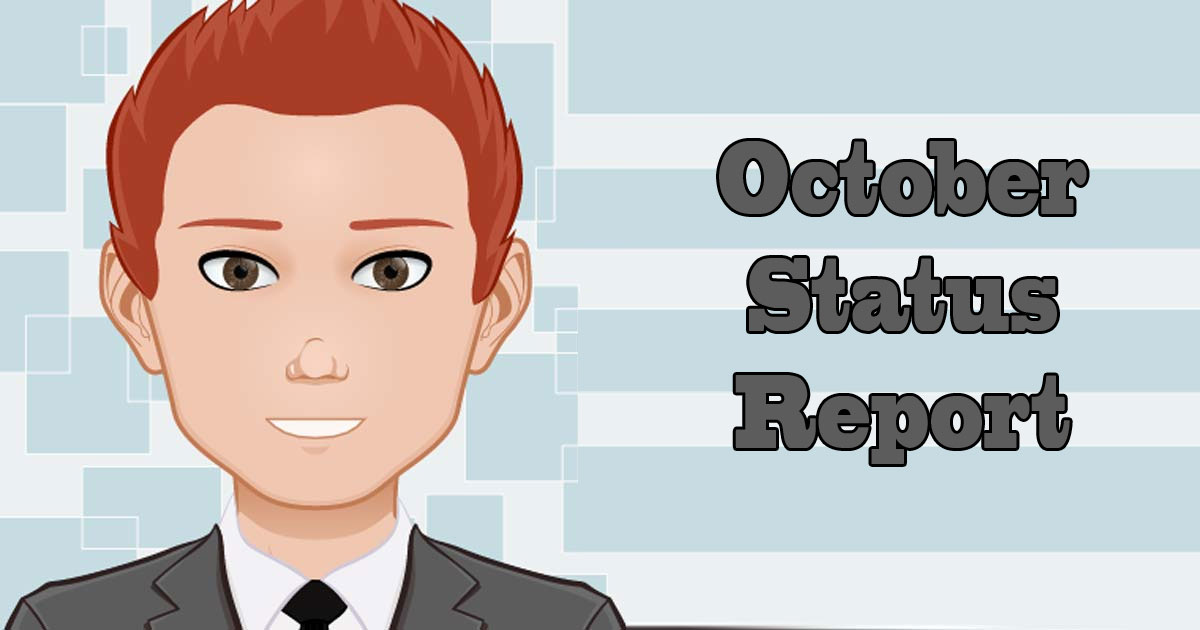 October didn’t have a great start. I am starting to become concerned with my money-saving plan, as I continually come up short. I think I need to at least explore other options.

However, I don’t want to chase everything and lose focus. As much as I would like to actually sell some sites, dropship on Amazon, and sell t-shirts, I feel like I started the month off far enough along in client talks to keep that as a high priority.

One investment deal is likely dead. The original details have changed, and the new details just aren’t good enough to actually pursue. The other still seems doable, though, but it too has changed. However, the changes aren’t extreme enough to give up on it.

Another investment opportunity might have also popped up, which would work out well since the one deal is basically dead now. It gives me a reason to continue saving, but as of now, the details aren’t available to determine whether or not I will actually go through it. I have considered it in the past but the details were terrible back then.

Towards the end of the month, the deal that died came back alive, but in new terms that may or may not work. All the details haven’t been ironed out, but it’s more about building a relationship, so if the deal doesn’t work, there are new potential projects that might. That makes it more likely that something will happen, even if it wasn’t the specific deal I knew about for the last year and a half or so. It really means I need to stick to the savings plan.

I did start reaching out to new potential clients after taking a break in the last few weeks of September. Early in the month, I had a few meetings with potential clients along with a few more initial calls. It started to get to the point where scheduling calls became real inconvenient while trying to find time between flights and traveling.

The whole in-person meetings with the clients at the beginning of the month really screwed up my schedule. Getting up early, traveling all day, and then sleeping very little put me in a weird schedule of falling asleep in the evening and waking up at 4:00am.

That was on the 8th. By the time I got back on schedule, it was time for another visit on the 17th. The only nice thing that happened was the trip to the client site to kick off the new contract was canceled. It was deemed unwarranted since it wasn’t a brand new contract with a new resource requiring brand new access.

Even though it was a new contract, all my access would roll over from the old contract, and I already have a laptop, so going didn’t make sense.

The day before my second onsite visit, I got the email from Delta stating that they would wave fees if I wanted to change my flight due to the weather, which is always a great sign. I ended up getting delayed at the airport for about 2.5 hours.

I did start reaching out again, but very selectively this time. On the 25th, I signed the contract for the client I visited on the 17th. The first client I visited is interested, but we delayed negotiations while I handled the deal with the second client.

They are interested in me being onsite far more than I would prefer to be. With travel, most of my time is going to be taken up. If I can’t get them to agree to a lower amount of time with them and a greater time working remotely, I might have to turn down this opportunity.

Client work and selling websites are still the primary focus. With the additional help along with starting some ad campaigns, I am really trying to get the websites sales to take off. The two client visits and the definite addition of at least one of them will help boost my income starting next month.

With the additional boost, and still the potential of getting another client, I would like to turn up the ads even more on the websites since now I have money coming in that I can afford to spare a little on ads without the pressure of having to hit a home run with every campaign.

Just laying the foundation, building up a following, and earning trust would go a long way. When the time comes when I desperately need sales, I will be happy I have a head start. I would like sales to actually come in for the websites before the end of the year, though, so I may need to pick up the pace in November.