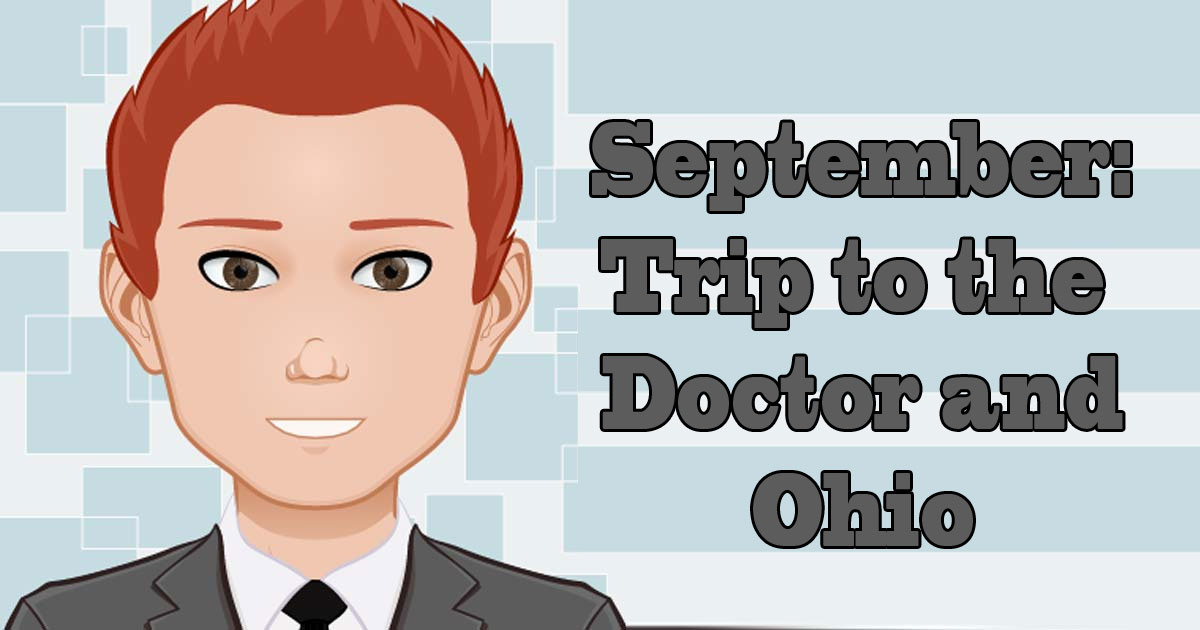 September didn’t start off too well. I had high hopes for everything to be back on track with the investments close to being finalized. None of that was the case. Investments were falling apart and my schedule was still completely screwed up.

To make things worse, I was still feeling sick. I did end up trying to get a doctor’s appointment, but with the whole Covid thing still going on, almost no one was seeing new patients. In order to establish primary care, I first had to schedule an appointment with a nurse. However, that wasn’t something I could get soon. I had to schedule for 2 weeks out.

The first full week of September at least had the appointment scheduled and my schedule was getting back on track. Plus, North Carolina went to Covid Phase 2.5 and started opening up more things, getting closer to being back to normal. However, it also included Labor Day, which is a non-billable day. It makes the income for the month drop a bit.

Things did start coming together that week, though. It’s the first time where the schedule was on track, and the investment deals were at least moving forward without me constantly have to push them. The investments did have a deadline of the 25th of September, though, that was really important to hit. I think a big reason they started to move was mainly due to getting close to that.

The last two full weeks of the month would be spent submitting the documents required and then heading to Ohio to actually close. In order to help make the Ohio trip easier, I did take a few days off from two clients over those two weeks. I never took a full week off, and I didn’t take off from all the clients, mainly to keep some revenue coming in. But I did take off enough to make the trip to Ohio quiet without the need to answer emails, messages, and calls while driving.

With a definite deadline to get all the documents submitted and then be on the road to Ohio, my schedule started to go off track again. The only helpful thing was that with gyms and fitness centers reopening, I have access to an elliptical in the morning to do cardio instead of having to walk for an hour. That drastically shortens the amount of time I need in the morning before my first call and gives me some time to sleep in, when I go off track and stay up too late.

Leading up to the days before heading to Ohio, some major reasons to go were already starting to fall apart. Still, I had enough reasons to actually do it, but my timing was a bit off. I have things scheduled for the last few days I am there, but not too much for the beginning days. If I end up having to stay longer, the first 5 or so days in Ohio would be pointless.

The drive was pretty uneventful. I did make better time than I thought. The first stop was at my brother’s. It was more for goofing around than anything else. That actually backfired a bit, though, as I was behind schedule to start off the week. I also didn’t feel great that week, which wasn’t helping the schedule. I just wanted to sleep.

To make matters worse, investment deals fell apart towards the end of the week. A key date to close was missed, which started to make the deals less attractive. That lead to the issue of just giving up and going back to North Carolina, trying to work out an alternative, or just waiting it out for it finally to happen.

I ended up staying the Monday after I planned on returning to NC to close on one deal. However, early that day, I found out it had to be pushed again.

I was able to close on Tuesday and the other deal sounded like it was getting close. However, every day that went by, it was pushed a day. The month ended without ever closing on the deal.

It was a definite case of wanting to close and going back to North Carolina, but also wanting September just to be over.